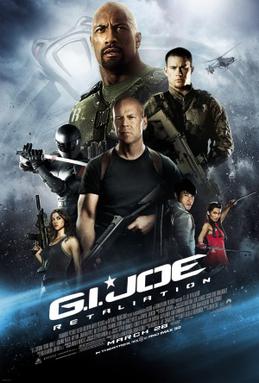 The Rock just makes everything better. Turning him into a G.I. Joe was a brilliant idea. Major props to whoever decided to cast him. G.I. Joe: Retaliation is a total 360° from the first film, which I thought was dumb and cartoonish. If I could be honest I would give G.I. Joe: The Rise of Cobra a Bad 4.5/10. It just didn’t hit home for me and could have been done better. Still, I held out because I knew an inevitable sequel was on the way and that it could possibly be better. And it was ladies and gentlemen it was! This film was way more realistic, had way better dialogue, and way better acting! Now take what I just said with a grain of salt readers because some of the dialogue was still a little bad, I’m talking to you RZA. This film takes place a certain number of years after the first one with most of the Joes from said film assumed to be dead, retired, or just out of the picture. Either way, it works out perfectly. Us viewers are given Duke (Channing Tatum) as the tether between films. His scenes with Roadblock (Dwayne Johnson) are some of the most memorable of the film. I really wish we got to see more of them together before Duke died. That is not a spoiler because this information was released last year, deal with it. With only a handful of Joes left to stop Cobra, we are left wondering if they will even succeed. I thought this was a great game changer as I thought the first film was overcrowded with Joes and this felt just right. Cobra in this film is seen as more of a realistic terrorist organization than what M.A.R.S. was in the first film. We have a new Cobra Commander played by  Luke Bracey and voiced by Robert Baker. I do not know why this was done because I am a fan of JGL and wish they had kept him in the part. I say this because honestly all they needed to do was change his costume, which is more fitting in this film of Cobra Commander. One of the things I liked about this film was Cobra’s plan for world domination. What we don’t see in many films is a truly evil presence. Yes, we get bad guys, but bad isn’t evil. The way Cobra totally destroyed London was one of the evilest things I have ever seen. Just imagining all the people that he killed just made me cringe. It was way darker than sending some Nanomites to eat Paris. Seeing that scene makes me wish I had added him to my Super-villain Superlatives. Also, the action was stunning and well done. The battle in the mountains between the Red Ninja’s, Snake Eyes, and Jinx was great. The film only fails on three parts; the Blind Master’s dialogue, the Storm Shadow-Zartan plot twist, and Cobra Commander suddenly having a breathing problem. Yeah move over Vader, you’re no longer the only black-clad asthmatic villain in town. Well before I ramble on too much further I give G.I. Joe: Retaliation a Decent 8.5/10! Probably would have given it a 9/10 if I had heard Cobra Commander yell’’ Cobraaaaaaaaaaaa!